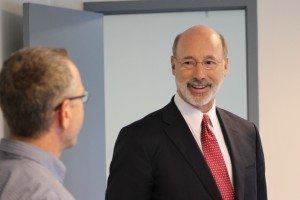 After a press event in Philadelphia, the Democratic governor, a few advisors and his state police security detail arrived at Exact Solar‘s warehouse on Walker Lane in Newtown Township.

Wolf, who has declared that he wants Pennsylvania’s minimum wage to rise from the current $7.25 to $10.15 an hour, took a tour of Exact Solar’s facility and spent time talking with owners Mark and Dara Bortman. The governor asked questions of the Bortmans about how the solar technology the company sells and installs works and whether certain items were made in the United States. (They were.)

Wolf, who is in his first term as governor and previously owned a large cabinet company that bore his family name, talked to Exact Solar’s staff of seven and the Bortman’s 17-year-old son Ari, a Pennsbury High School senior.

Starting wages at Exact Solar, which does work in Pennsylvania and New Jersey, at $15 per hour and increase with time at the company and experience, Mark Bortman said, adding even the company’s lone intern is paid.

Wolf and the Bortmans both agreed that a higher wage means less employee turnover and more motivated employees.

It’s a lesson that Wolf learned while running the cabinet business. He stated his above-minimum wage pay scale allowed for less turnover and saved on new employee training and other related start up costs.

From a business point of view, it made good sense to pay a fair compensation and benefits and all that too,” Wolf said. 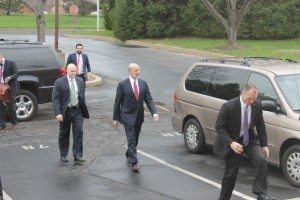 Jeffery Sheridan, Wolf’s spokesman, said the governor’s plan to raise minimum wage would include it being phased in over a set period of time to allow businesses to adjust.

Currently, a bill has been proposed to increase the minimum wage but has not made it to the Capital floor for a vote by the House of Representatives or Senate.

More Posts from this Category